The oldest signs of Lugwardine with Bartestree are the remains of two Roman roads: one running East-West from Stretton Grandison to Kenchester [Black Hole Lane]; the other running North-South from Blackwardine to Weston-under-Penyard [Whitestone/Longworth Lanes].

The Domesday Book, completed by the Normans in 1086, mentions both villages. They were in the Greytree Hundred section of the book and were very small. A ‘Hundred’ was a subdivision of a shire and each ‘Hundred’ had enough land to sustain approximately one hundred households. Herefordshire was divided into twenty hundreds, of which Greytree was one. The name Lugwardine means ‘an enclosed settlement on the River Lugg’. The name Bartestree originates from ‘Beorhtweald’s Tree’ which by the time of the Domesday Book had become ‘Bertoldestreu’. 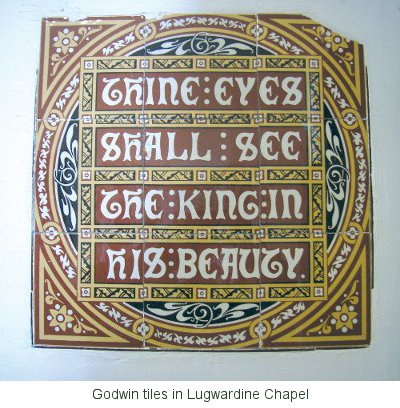 An inventory of archaeological sites and historic buildings prepared by English Heritage records the earthwork and buried remains of a medieval moated site to the west of Lumber Lane in Lugwardine and the site of a deserted or post medieval village between the Ledbury Road in Bartestree. The River Lugg enters the parish of Lugwardine in the North-West at the Lugg Bridge on the Hereford – Worcester road and broadly forms the western boundary as it flows to join the River Wye below Mordiford. The importance of the rivers is reflected in the Domesday Book which records three mills in the parish of Lugwardine: Lugg Bridge Mill, Tidnor Mill and Longworth Mill. Except in times of flood or drought, the Lugg was navigable upstream as far as Leominster. Coal from the Forest of Dean was carried to Leominster in barges hauled by six men or one or two horses. Wheat, flour, bark, timber, cordwood and iron bars were carried downstream in the returning barges. The river was made more navigable by the presence of two locks: one at Lugg Bridge Mill and one at Tidnor Mill.

The nineteenth century saw some major changes. The Reform Acts introduced voter power. This reduced the former dominance of the vicar and church wardens and by 1894 new, elected Parish Councils had emerged. The economies of the villages were altered by the tile works of William Godwin in 1851 and the creation of Bartestree Convent in 1863. William Godwin [1813-1883] took over the former brickworks in Lumber Lane where he made bricks, quarry tiles and drainpipes. Later, he and his brother developed a wide and inspirational range of decorative tiles that became nationally famous.

At its most productive, the tile works employed a hundred people. It had closed by 1907 but displays of Godwin tiles, as shown above, can still be seen in St. Peter’s Church, Lugwardine Chapel, Penkelly, Porch House and the New Inn.

In 1928 the 2110 acres of Lugwardine and the 420 acres of Bartestree were authorised to be a single ecclesiastical parish and a single administrative parish followed.

How we protect your data